Corn vs. Flour Tortilla — The Unique History of the Tortilla 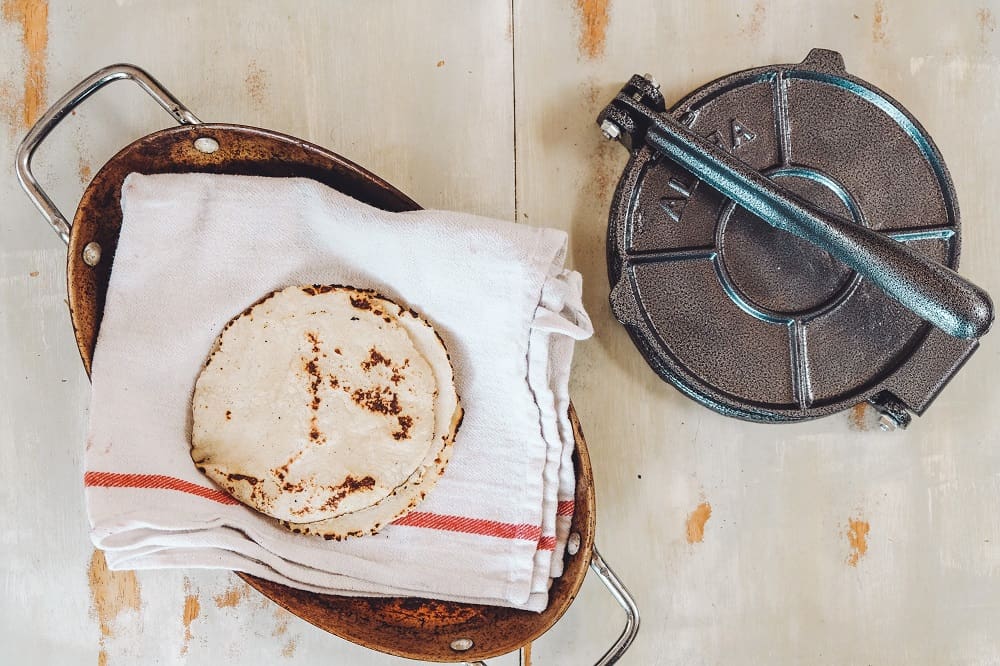 What food has a history spanning over thousands of years, a multitude of cultures, and is sure to put a smile on your face if someone suggests it when you want to eat out?

It has to be our humble tortilla!

The obsession over tortillas is there for all to see, from town centers to shopping malls.

Let’s show them we love them by getting better acquainted with them individually, corn vs. flour tortilla.

Our tortilla tale starts with the corn tortilla, dating back at least 12,000 years.

Believed to have been invented by a Mayan peasant for his king, this circular treat transcended generations and civilizations.

The basis is nixtamalized maize flour, achieved by mixing the maize with limestone, still imitated today. This leaves us with the smaller, thicker tortilla we know and love, with its rich flavor and color.

The flour tortilla has a more obscure history. However, if you think of them as not being authentically Mexican, you’d be wrong!

In the early 1500s, Jewish conversos (who had nominally converted to Christianity after the Spanish Inquisition) moved to northern Mexico and liked the idea of the native’s delicious mini discs, but not corn.

Instead, they decided to use a crop they trusted, wheat!

To this day, there is a divide in Mexico between the corn vs. flour tortilla. Flour tortillas are the kings of the north, and corn tortillas take the crown everywhere else.

No one can deny the popularity of tortillas in modern America.

The tortilla market is worth over $37 million today, and it’s expected to reach a mindboggling $59,444.8 Million by 2027. So it’s not just you who thinks they are delicious!

Everything from Hispanic cuisine is at the top of most people’s lists of places to eat out to health-conscious people looking for an alternative to bread has all helped keep the tortilla popular.

Difference Between Corn and Flour Tortillas

So pitting them against each other, corn vs. flour tortilla, what is the difference?

A corn tortilla is richer in flavor and is more brittle, whereas flour tortillas are softer and take more of a backseat to whatever they are a vessel for.

Corn tortillas best serve tacos and enchiladas. The thicker dough stands up well to the mouth-watering juices and sauces that you expect in this appetizing delicacy. Also included are crowd favorites such as nachos and tostadas and obviously, tortilla chips.

As wheat has high amounts of gluten, the added flexibility means that it lends itself to wrapping tasty treats. Quesadillas, burritos, and fajitas are all served best in a flour tortilla.

Here’s How to Reheat Tortillas at Home

So when looking at corn vs. flour tortilla, another question pops up. Do I treat them the same when reheating?

The answer is no.

A corn tortilla can be heated quickly in a pan, leaving them for 30 seconds on each side. Otherwise, you can use the traditional method. Wet it and heat it on an open flame on a gas cooker until perfect.

Flour tortillas should be heated in the microwave or oven. For the microwave option, cover it in a damp paper towel, and heat for 30 seconds to a minute. If using an oven, preheat to 250 F. Then wrap them in a damp dishcloth and place them in a dish, heating for approx 20 mins.

Corn vs. Flour Tortilla: Who Wins?

Although slightly different, it’s clear that there is only one real winner in the battle between corn vs. flour tortilla.

We hope we have gotten you salivating by the end of this post. If you need a solution and live in Salt Lake or Lehi, Utah, we have the answer!

Taqueria 27 can scratch that itch, so regardless of how you like them, visit any of our locations or order online and be sure to be satisfied!